As Prof. Karel T August, the Chairperson of the Discipline Group announced, they are honouring Sauer's contributions to the research of Christian martyrdom theology and religious freedom as well as his expertise in missiology. Sauer was previously a Research Associate and served as a temporary lecturer in missiology and world religions at the faculty. 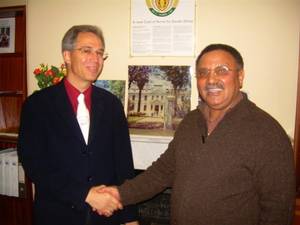 The University created the category of honorary appointments to give recognition to individuals for their proven specialized expertise, and/or their eminence in their profession and field of study, and to involve them in the academic programmes of the relevant department. The same criteria are applied for such an honorary position as for a permanent remunerated appointment at the same level and the appointment is valid for a period of three years.

The IIRF Director, Prof. Dr theol Dr phil Thomas Schirrmacher (Bonn) comments: “IIRF congratulates Prof. Sauer to this achievement and recognition by a secular university and hopes that it helps to achieve the agenda of bringing the issue of religious freedom and persecution into universities, governments and media!”

Prof. Sauer is also an ordained minister of the Evangelical-Lutheran Church in Württemberg, Germany, which granted him leave of absence from 2000 to 2011 for missionary service in South Africa with the United German Mission Support (VDM, Bassum). As of November 2011 the regional church body, which is publicly committed to advancing the cause of religious freedom and to the support of persecuted Christians is seconding Dr. Sauer to the Cape Town Bureau of IIRF for a period of six years, sharing the salary with the institute.

The Theological Faculty of Stellenbosch University near Cape Town is the oldest in South Africa and celebrated its 150th jubilee in 2010. 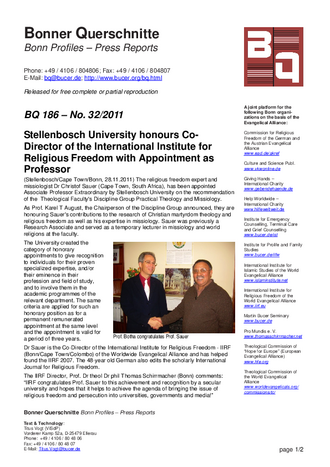