Obituary for Maja Caspari, founder and head of the Romania Section of the International Society for Human Rights, who died in March 2020

(Bonn, 09.06.2020) After 30 years of membership in the International Council, Maja Caspari, Chairperson of the Romania Section, left us in March 2020 at the age of 88 after a long illness. 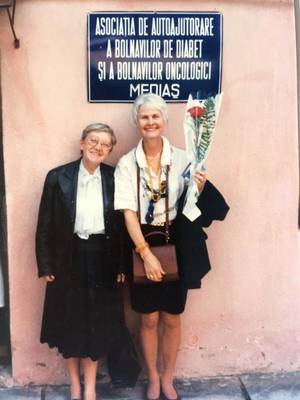 Immediately after the fall of the Romanian dictator Ceausescu in 1989, Maja Caspari had the idea and the courage to bring sick people out of isolation and to persuade them to take on tasks and responsibility for other sick people. From this initiative, when diabetics, cancer patients and parents of diabetic children met for the first time to help each other, the section of the International Society for Human Rights (ISHR) was born, which helped to remove social obstacles to the integration of disabled and sick people. Under most difficult conditions and equally difficult circumstances, it has, supported by the ISHR Sections from Germany and Austria, through extraordinary efforts and selfless work, achieved a great work from which everyone has benefited not only the sick and disabled, but also the citizens of her home town Medias.

The concern for human rights was already her concern during the time of the dictator Ceausescu, because she belonged to those who did not meet the criteria of perfection for the communist dictatorship of Ceausescu, namely to the handicapped people who were not allowed to show themselves in public and lived a life of inner exile in the circle of their relatives. Maja Caspari, herself severely ill with diabetes, had raised her voice against this and worked to improve her situation. With the foundation of the Cancer and Diabetes Centre in Medias, which is self-administered by the sick and their relatives under her leadership, she has restored justice and dignity to those who were previously outcasts. She has set an example to all disabled people in Romania through her personal commitment and has rendered them invaluable service through her constant struggle with the authorities and through the institutions.

The Cancer and Diabetes Center became the base of humanitarian aid for numerous charitable associations in Germany, Austria, Switzerland and other European countries. Thanks to this aid, Medias became known far beyond the borders of her town and her nation. As the head of the Romanian section of the International Society for Human Rights, she has persistently and publicly pointed out human rights violations and other legal grievances; she has contributed to human rights education and called on citizens to take action themselves for the preservation of human rights. Maja Caspari, with almost 30 years of membership, was one of the pillars of the International Council of the IGFM/ISHR.

We will honor her memory.

Dear Mrs. Caspari,
dear leaders, members and friends
of the Romanian Section of the International Society of Human Rights,

In December 1989 a dispute over religious freedom which arose in Timisoara, the city where I teach regularly at the University of the West, became the starting point of the Romanian Revolution. The Communist government wanted to get rid of a pastor, because he often criticized the government, but his church members and then a steadily growing number of all kind of citizens protected the pastor, including some from Romanian, Hungarian and German backgrounds alike. The harsh and brutal reaction of the government became a signal for protests all over Romania, the beginning of the end of a rule against human rights. We very much regret those people that died, yet it was the Romanian people who fought for freedom and human rights against a dictatorship.

The history of the brave Romanians involved with the IGFM/ISHR started well before this, but it was a proud and obvious sign of a new area, that they gathered quickly and founded our Romanian Section in 1990 at a time, when no one knew what would be coming. But they wanted to assure that the new Romania would be built around the idea of human rights.

Thus the fact, that the Romanians elected a President from Sibiu, with his fight against corruption and being from German descent, proves that Romania has learned to go beyond racism, government control, government corruption, and to give human rights a fair chance. The Romanian ISHR played a vital role in this.

On behalf of the International Council of the ISHR, I congratulate you to the 25th birthday of your section and thank you for all your work done in the last 25 years. On behalf of the worldwide ISHR family, I am proud that we have so many experienced human right fighters in our midst. I hope that your history will someday be written so that others may learn from your good example.

Yours, Thomas Schirrmacher
President of the International Council of the ISHR 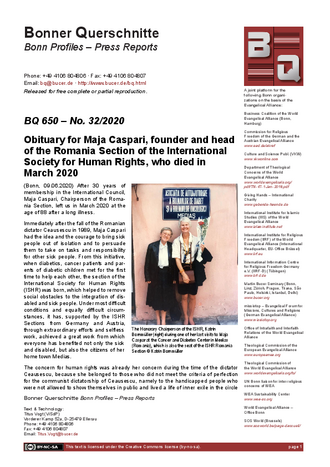