(Bonn/Cape Town, 26/11/2009) The director of the International Institute for Religious Freedom (Bonn, Cape Town, Colombo) of the World Evangelical Alliance, Prof. Dr. Dr. Thomas Schirrmacher, announced that an international theological declaration on persecution of Christians is in the process of being drafted.

It’s aim is to develop an evangelical theology of suffering, persecution and martyrdom for the global church in mission. 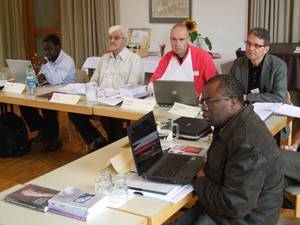 The declaration emanates from an international consultative process, coordinated by the co-director of the institute, Dr. Christof Sauer (Cape Town, South Africa) on behalf of the Religious Liberty Commission of the World Evangelical Alliance.

The climax so far has been a consultation which took place on September 16-18, 2009, in Bad Urach, Germany. About 30 theologians from 5 continents participated.

According to Dr. Richard Howell, co-convenor of the consultation and General Secretary of the Asian Evangelical Alliance, this is the first international exchange of this kind, as the topic has so far been discussed only rarely on a national or continental level.

The president of the Synod of the Evangelical-Lutheran Church in Württemberg, Dr. Christel Hausding presented greetings to the consultation participants on behalf of Bishop Dr. Frank July. Hausding said: “I thank you very much, that you are providing the important theological ground work on this issue.” People growing up in the West of Germany are surprised to learn, that even there/here?, Christians can suffer public defamation, as has recently happened.
The convenor of the consultation, Dr. Sauer gave some indication of the outline of the declaration: “As Christians we want to live in peace with everybody. We are actually not seeking suffering, but when our witness for Christ is leading to persecution, we are ready to suffer for Christ. At the same time we are publicly speaking up against persecution of Christians and adherents of other religions and we are opposing injustice and systems of oppression on the basis of human rights.”

The chairman of the International Institute for Religious Freedom, Rev Dr. Paul Murdoch emphasized the enabling role of the institute: “The IIRF is establishing a network of academic research on a global level. This study process has exciting potential to serve the global church in mission”. This consultative process has led to a uniquely broad cooperation between the WEA Commissions for religious liberty, theology and mission as well as the Theological Working Group of the Lausanne Committee for World Evangelization. The project aims to feed in to the Third Lausanne Congress for World Evangelization to be held in Cape Town in 2010.

The declaration and a publication of the consultation papers are expected early in 2010. 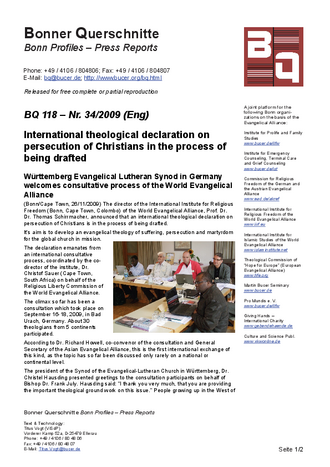