Schirrmacher thanks 40.000 Ahmadiyya Muslims for the Engagement for Religious Freedom

(Bonn, 11.10.2018) The president of the International Council of the International Society for Human Rights (ISHR) and Director of the International Institute for Religious Freedom (IIRF), Professor Thomas Schirrmacher, thanked the 40.000 participants of the Ahmadiyya Jalsa Salana in Karlsruhe, the yearly meeting of the Ahmadiyya Muslim Jamaat in Germany, just before the lecture of their spiritual leader, ‘His Holiness Kalif’ Mirza Masroor Ahmad, for not only enjoying religious freedom in Germany after having fled death threats in Pakistan, but in turn loud and insisting called for religious freedom and against any violence or compulsion in religion. 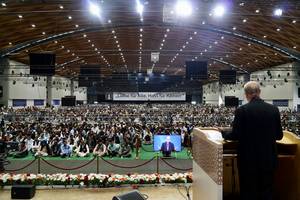 Among other things Schirrmacher called upon Pakistan to change its constitution, which states, that Islam is the State Religion, only Muslims have full rights and in an extra paragraph that Ahmadis are no Muslims.

On behalf of the World Evangelical Alliance (WEA), Prof. Thomas Schirrmacher has for the second time met with ‘His Holiness’ Mirza Masroor Ahmad, the fifth Caliph of Ahmadiyya Muslims. The two met this time in the Caliph’s headquarters in London. The discussion revolved around the common struggle for religious freedom.

Leading individuals carrying responsibility within Ahmadiyya Muslim Jamaat thanked the ISHR, the IIRF and the World Evangelical Alliance for their efforts to protect Ahmadiyyas around the world and for their having repeatedly criticized Pakistan for killing Ahmadiyyas, for persecuting them, and for constitutionally denying them citizenship. 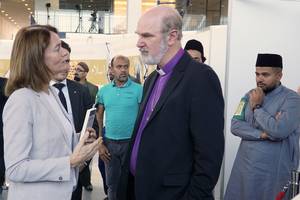 Schirrmacher also had a short meeting with the Federal Minister of Justice, Katarina Barley (SPD), who also spoke to the assembly. Schirrmacher thanked the minister for representing the federal government at this assembly even though the mainline Muslim networks create a lot of pressure to ignore the Ahmadis.

Schirrmacher had already met the fifth Caliph in 2014 in Karlsruhe and spoken to the 34,000 visitors for rejecting all forms of violence against those who think differently. The Ahmadiyyas are a great model for political Islam’s perpetrators of violence. 2017 Schirrmacher met the Caliph of Ahmadiyya Muslim Jamaat in London and spoke at the conference there. 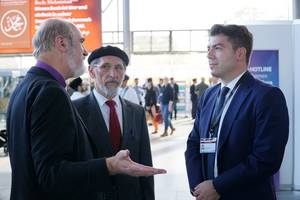 Schirrmacher, as the Director of the International Institute for Religious Freedom, has repeatedly pointed out that in his view Ahmadiyya Muslims often are victims first and then Christians next, for instance in Pakistan or in Indonesia.

Persecution in Sunni Muslim countries and above all in the home country of Pakistan is primarily traceable back to the fact that according to Mohammad, there are not to be any further prophets. Adherents of special variations of Islam with a prophet after Mohammad are, as a general rule, more strongly discriminated against than Jews and Christians and are not categorized as a religion of the book, but as pagans and idolators. 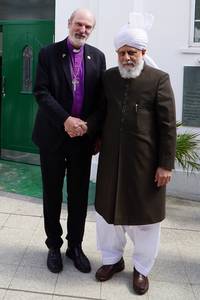 The Ahmadiyya movement originated in 1889 after Mirza Ghulam Ahmad (1835–1908) initially labeled himself as a recipient of revelation. He also later labeled himself an incarnation of Christ, Krishna, and Mahdi, which was equivalent to being a prophet sent by God even though he was not sent with scripture. In 1904, Mirza Ghulam Ahmad labeled himself a reappearance of Mohammad. Under his next but one successor, his son Mirza Bashir ad-Din Ahmad, the movement split into the so-called Qadiani group, who revere Mirza Bashir ad-Din Ahmad as the second Caliph, and the so-called Lahore group, who view the founder Mirza Ghulam Ahmad only as a “renewer” and who reject the office of caliph while instead being led by an emir. Today, the Qadiani group, as Ahmadiyya Muslim Jamaat (Ahmadiyya Muslim Community), is globally the vastly larger and most widespread group.

In contrast to the large majority of Sunni and Shiite theologians, the Ahmadiyya Muslim community campaigns for religious freedom, strictly rejects violence as a means to spreading Islam, and seeks to solicit adherents through intensive but fully voluntary and peaceful missionary work. The most important motto of the Caliph is present everywhere in the form of large banners hanging at major events: “Love for all, hatred for no one.” 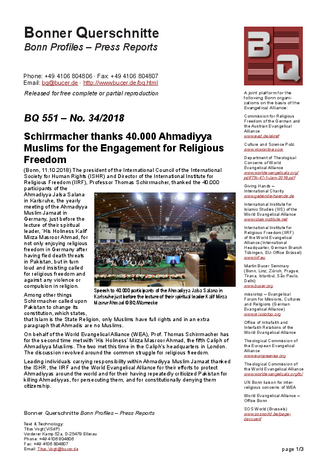 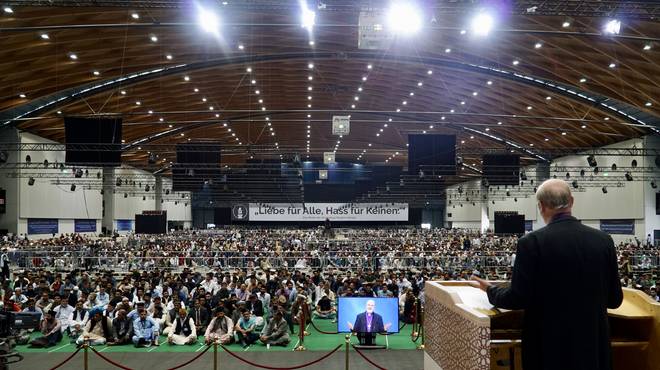 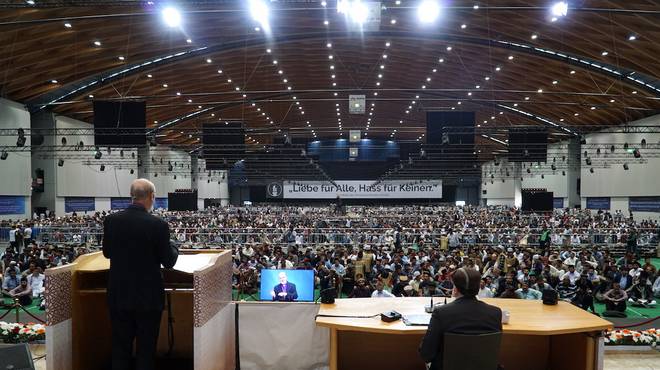 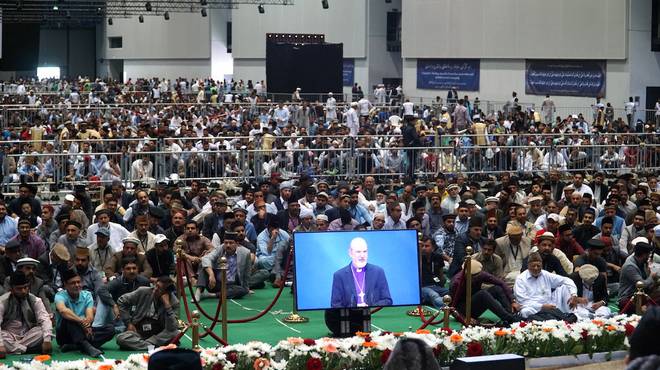 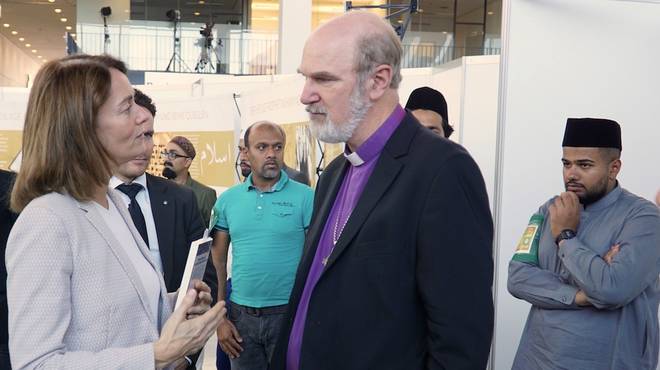 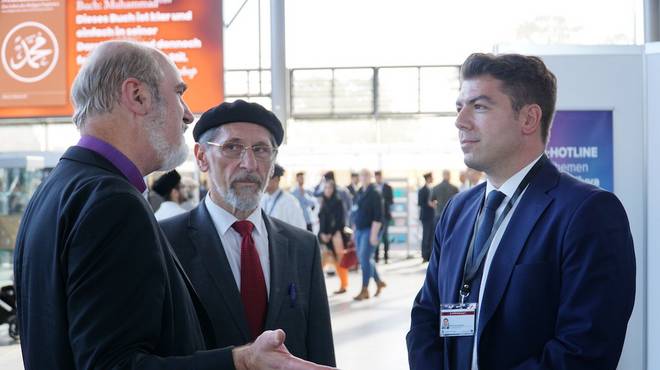 Schirrmacher in discussion with the Chair of the Ahmadiyya Muslims of Germany, Abdullah Uwe Hans Peter Wagishauser, and the member of the federal parliament Thomas Hitschler (SPD) © BQ/Warnecke 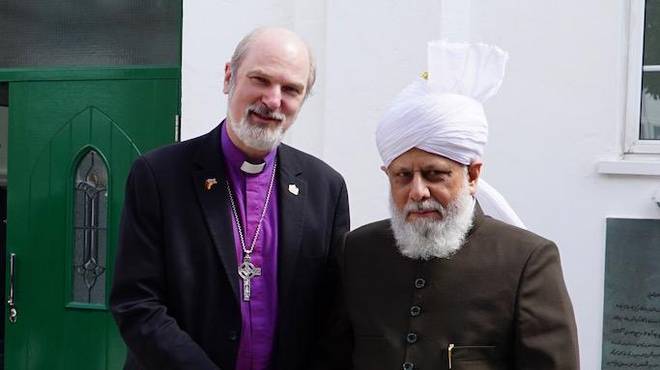 In front of the Fazl Mosque with ‘His Holiness’ Mirza Masroor Ahmad, the fifth Caliph and leader of Ahmadiyya Muslims © BQ/Warnecke 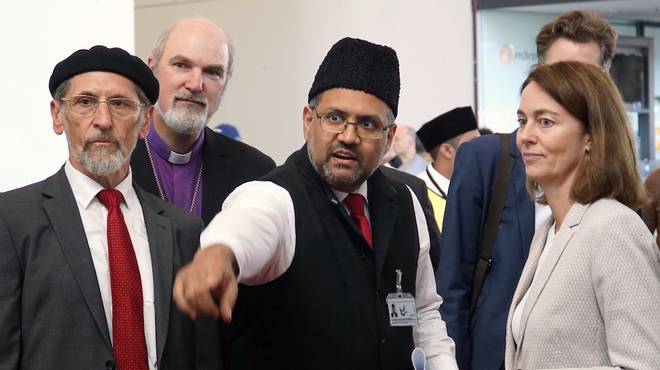