Christine Schirrmacher in discussion with ambassadors from Muslim countries in Brussels

(Bonn, 27.09.2013) On invitation of the “Forum Brussels International” and the Brussel’s office of the political foundation Hanns-Seidel-Stiftung, Christine Schirrmacher, Ph.D., well known German professor of Islamic Studies and director of the International Institute of Islamic Studies of the World Evangelical Alliance (WEA), spoke on the topic “Islam in Europe – Politicization or Integration?” forambassadors of several Muslim majority countries accredited to the European Union, among them the ambassadors of Turkey, Egypt, Malaysia, and Bosnia and Herzegovina, as well as to a group of politicians, Middle East experts, leaders of human rights organizations andjournalists. 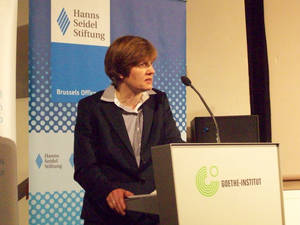 “In which direction is Islam presently developing in Europe?” Schirrmacher asked. Is it developing into the direction of de-politization and enlightenment or is it more and more identifying with political Islam which does not only promote Islam as a religion but in the long run aims at establishing Islam also as a societal and political order?

After a migration history of over 50 years with people coming from Turkey, formerly as guest workers, but also from Arab countries, Iran, and from different Asian and African countries, positive encountersand good friendships between Europeans and migrants are still,due to cultural reasons, regrettably still in many cases an exception,not a rule.But the real question in the European context which Europe has to deal with more intensively in the future is, accordingto Schirrmacher,not so much the question of religious freedom  as religious freedom is already a reality in most respects. The question of real importance is how Europe will deal with political Islam which does not allow religious freedom for converts, minorities, orfor those who think differently.At the same time, it does not unambiguously take sides on behalf ofEuropean democracies.

On the evening of the same day Prof. Schirrmacher offered a second presentation in the auditorium of the Hanns-Seidel-Stiftung in Brussels on the topic “Islam in Europe“ which was followed by a round table discussion. Guests on the podium were the EU official Prof. Dr. Michael Köhler, the Indonesian ambassador to the EU, Arif Havas Oegrosono, as well as Malika Hamidi, a representative of European Islam.

The group discussed the question how integration of Muslim immigrants can be dealt with more successfully. All agreed on the necessity of subscribing to a common set of European values (human rights, women's rights,andreligious freedom) and being resolved to take a stand against extremists.

·         Report in the Stiftungspost of the Hanns-Seidel-Stiftung (

Photo2: Christine Schirrmacher during her presentation in Brussels 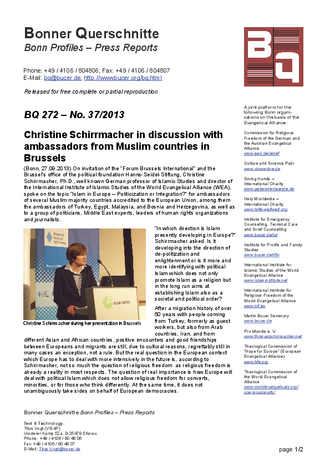