(Bonn, 13.11.2020) The German Federal Minister of the Interior, Horst Seehofer, has appointed Christine Schirrmacher, Professor of Islamic Studies at the University of Bonn, to the twelve-member expert committee commissioned by the German government to research the manifestations and incidence of hostility towards Muslims in Germany. A report is to be prepared within two years. The Minister announced the establishment of this committee following a terrorist attack on Muslims in Hanau on 22 August 2020. 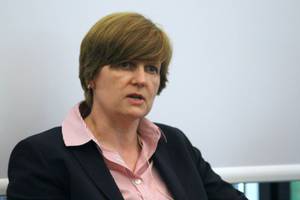 As Schirrmacher told the Protestant news agency idea, in her research and teaching she critically examines the manifestations and justification of violence and oppression, for example against women and people of other faiths in the name of religion. She believes that hate speech, discrimination and persecution of minorities and all those who hold different views should be punished, including such behaviour towards Muslims.

Schirrmacher has frequently advocated for the religious freedom of Muslims. In 2015, she was an expert witness at the hearing on “Freedom of Religion and Democracy” held by the Human Rights Committee of the Bundestag, the German federal parliament. She also serves as the World Evangelical Alliance’s Commissioner for Islam Affairs, responsible for international dialogue with Muslim leaders.

Schirrmacher was appointed by the German Bundestag to the Board of Trustees of the German Institute for Human Rights in Berlin, and by the Federal Minister of the Interior as 2nd Chair of the Scientific Advisory Board of the Federal Agency for Civic Education, Bonn/Berlin. She is also a member of the Board of Trustees of the Protestant Central Office for Worldview Issues of the Protestant Church in Germany (EKD) and sits on the Scientific Advisory Board of the Federation of German Criminal Investigators, Berlin. Furthermore, Schirrmacher participates in the network “Connecting Research on Extremism in North Rhine-Westphalia”, which the Ministry of Culture and Science of North Rhine-Westphalia (NRW) set up in 2016. The network brings together researchers, practitioners and administrators in NRW who deal with religiously based extremism, with a primary focus on Salafism.

On 1 September 1, Federal Minister of the Interior Seehofer launched the “Independent Expert Group on Muslimophobia” (UEM), including both researchers and practitioners, with the purpose of constructing strategies to combat Islamophobia. “Muslimophobic attitudes are not only a threat to Muslims, but to social cohesion as a whole”, Seehofer stated. The UEM is intended to contribute to “better and more targeted action by the state and society”, he added, in the wake of racist and anti-Muslim incidents as well as actual and planned terrorist attacks in recent months.

“The terrible attack in Hanau is further proof that the poison of right-wing extremism reveals the evil in people. It is an attack on fellow citizens and friends, an attack on our common values which affects us all together. I will not accept this”, Seehofer said.

The Central Council of Muslims in Germany and the Coordination Council of German Muslims welcomed the establishment of the investigative body, and similar comments came from abroad, including the Observatory for Combating Extremism at the Al-Azhar Mosque in Cairo. The online newspaper Egypt Today quoted the Observatory as agreeing with Seehofer that anti-Muslim hostility endangers not only Muslims but social cohesion in general. The Al-Azhar Mosque is the most important mosque in Egypt, founded in the 10th century AD by the dynasty of the Shiite Fatimids. It also hosts one of the most important theological schools of Sunni Islam in Egypt, and its affiliated university has about 20,000 students.

The twelve members of the UEM include experts from academia and practice with a broad range of professional knowledge concerning on aspects and effects of and/or the prevention of anti-Muslim hostility in various areas of society. There are six university professors along with six people associated with educational or documentation institutions or non-governmental organizations.

The twelve members are: 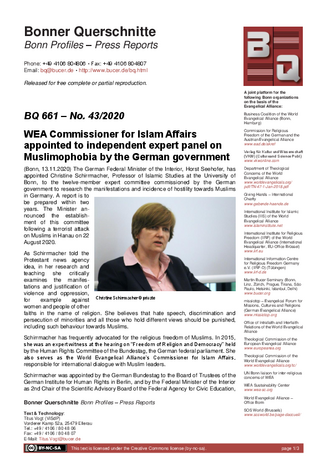