(Bonn, 13.12.2018) The Chair of the Advisory Board of the Central Council of Oriental Christians and Associate Secretary General of the World Evangelical Alliance, Thomas Schirrmacher, was received by the head of the Armenian Apostolic Church, Catholicos Karekin II, for an audience with his wife, the Bonn Islamic scholar Christine Schirrmacher, after they had commemorated the 1.5 million victims of the Armenian genocide from 1915 in the Genocide Memorial Complex Tsitsernakaberd in Yerevan. Christine Schirrmacher regularly lectures on this genocide at the University of Bonn. 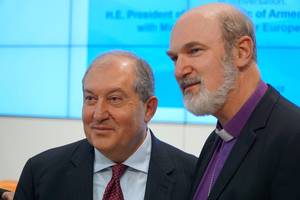 Before and after, Thomas and Christine Schirrmacher visited the Parliament, the former President, the country’s only rebuilt major mosque, and several human rights organizations, including the Armenian branch of the International Society for Human Rights chaired by Ms. Bela Shikaryan. The trip was organized by Dr. Gayene Werk (Schwerin) of the German-Armenian Society.

Since the President of the country was not in the country, the meeting was caught up on shortly afterwards in Berlin. Armen Sarkissjan, born 1953 in Yerevan, is an Armenian physicist, computer scientist, entrepreneur, diplomat, and politician. Sarkissjan was Prime Minister of Armenia from November 1996 to March 1997. He has been President of Armenia since April 2018 and has carefully accompanied the Velvet Revolution of 2018. 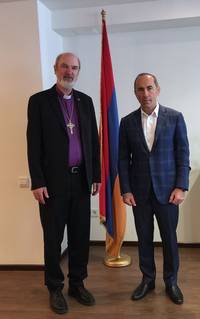 Schirrmacher also visited representatives of previous governments to get a comprehensive picture and to ask them for support for the new course, such as the former President of Armenia, Robert Kocharian, and the Vice-President of the National Assembly, Eduard Sharmazanov.

Eduard Sharmazanov has been vice-president of the National Assembly of the Republic of Armenia since 2011 and spokesman of the Republican Party, the ruling party until the Velvet Revolution of 2018. He has been a member of parliament since 2007.

In 2015, Armenia began to transform the semi-presidential system into a parliamentary system. This gave the parliament greater powers, while the president was left with representative tasks. After the last president had himself elected as prime minister at the end of his last possible term in office, there were sustained mass demonstrations, the so-called “Velvet Revolution”, the leader of which eventually became prime minister without a parliamentary majority for a transitional period, which is why a new parliament was elected in December 2018. 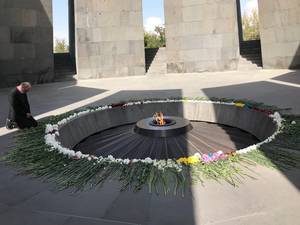 Because of the supposed proximity of the Catholicos to the old government, for the first time there were demonstrations in front of his office with the demand for a stronger separation of church and state and the resignation of the Catholicos. Since 2009 proselytism away from the Armenian Apostolic Church was forbidden, religious minorities were strongly restricted in their missionary work. Schirrmacher therefore stood up with the Catholicos for the support of the demanded religious freedom in the country.

The Genocide Memorial Complex Tsitsernakaberd on a hill in Yerevan commemorates the genocide of 1.5 million Armenians from 1915 and is the site of the annual commemoration ceremony on April 24th. It was opened in 1967, after the independence of the country in 1995 the memorial wall and museum were added. 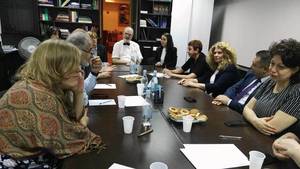 Thomas and Christine Schirrmacher met with the presidents of several human rights organizations through the Armenian branch of the IGFM. In a conversation with Karen Zadoyan, President of the Armenian Lawyer’s Association, and other board members (see photo), they acquainted themselves in detail with the work of this human rights organization, which fights corruption with the help of anti-corruption centres throughout the country and defends poorer fellow citizens under labour law, in addition to classic human rights cases. Schirrmacher was informed about the enormous progress in the fight against corruption since the Velvet Revolution of 2018.

The Catholicos was born in 1951, studied theology in Bonn from 1975, and was soon the spiritual representative of the then nine Armenian congregations in Germany, which is why he still speaks German today. In 1983 he became bishop, in 1992 archbishop. In 1999 he was elected 132nd Catholicos. In 2013 he was elected President of the World Council of Churches in Busan, Korea. 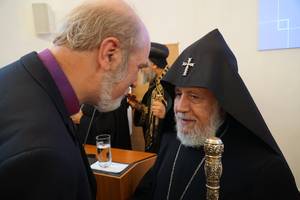 Among other things the Catholicos spoke of a “German month”, because before Schirrmacher Federal Chancellor Angela Merkel and the EKD Council President Bishop Heinrich Bedford-Strohm had paid their respects to the Catholicos.

Schirrmacher first met the Catholicos at the inauguration of Pope Francis in Rome in 2013, then in Busan the same year at the WCC Assembly, and during his visit to Berlin, when the EKD had invited the heads of the Ancient Oriental churches to commemorate 500 years of Reformation.

Very Rev. Fr. Shahe Ananyan, Director of the Ecumenical Relations Department of the Mother See of Holy Etchmiadzin of the Armenian Apostolic Church, also took part in the discussion.

The programme also included a visit to the extensive renovation of the Mother Cathedral of Holy Etchmiadzin of the Armenian Apostolic Church, which was built in 301–303 and extended in 480, 618, and 1648. 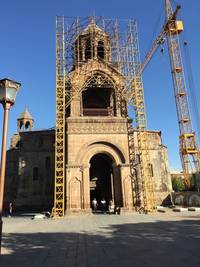 It is located in Vagharshapat, a city 18 km west of Yerevan, long known as the “holy city” or “spiritual capital of Armenia”. Vagharshapat was the first capital of Armenia (AD 102–330) and later again and again capital of Great Armenia, was often named after the seat of the church Etchmiadzin, and lost its importance at the beginning of the 20th century, but then grew enormously in the later Soviet period, and became a suburb of Yerevan.

The Kingdom of Armenia under King Tiridates III (Thrad III) was the first state to adopt Christianity as its state religion, 301/303 or 315 AD. Christianity in Armenia probably goes back to the work of the apostles Bartholomew and Thaddeus, even if historical sources are missing.

The Armenian Church belongs to the seven ancient oriental churches which were formerly called “monopysites” by the western and eastern churches and accused of heresy. In the meantime this designation is considered wrong, and the self-designation “Miaphysites” is used. It is common knowledge that the theological differences arose from a different use of the word for “nature” (greek “physis”) in relation to Jesus Christ, but that all churches confess together that the one Jesus as person of the triune God is both true God and true man. 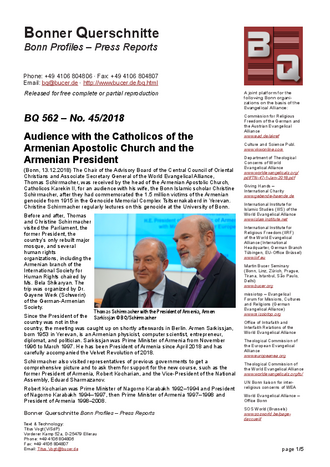 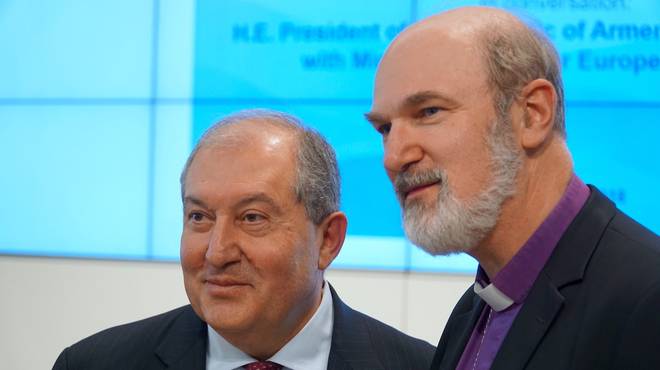 Thomas Schirrmacher with the President of Armenia, Armen Sarkissjan © BQ/Schirrmacher 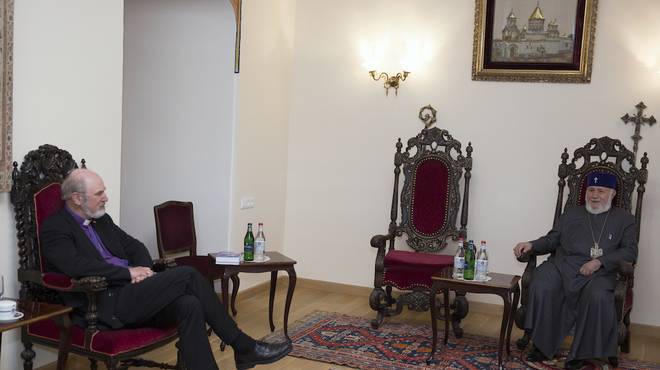 Audience for Thomas Schirrmacher with the Catholicos and Patriarch of the Armenian-Apostolic Church, Karekin II © BQ/Schirrmacher 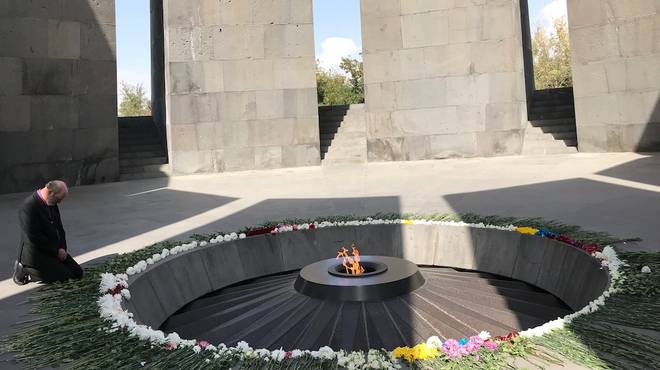 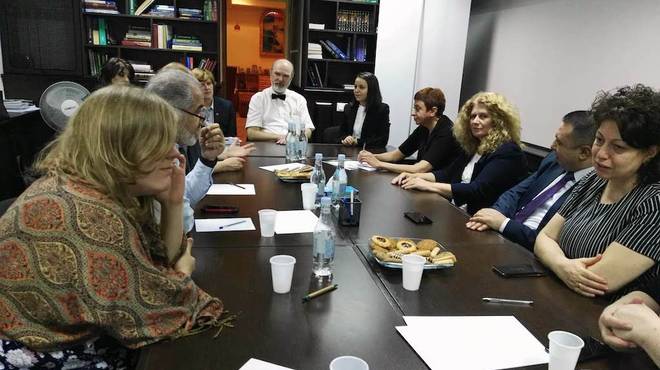 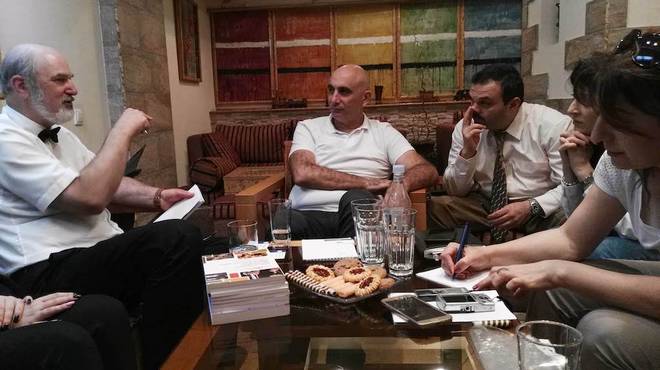 Thomas Schirrmacher in conversation with Karen Zadoyan (center), President of the Armenian Lawyer's Association, and other board members © BQ/Schirrmacher 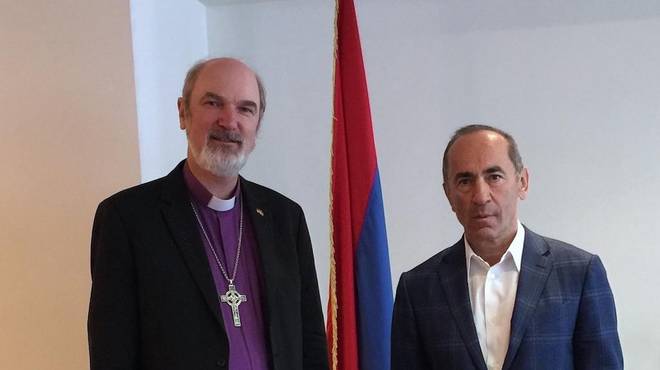 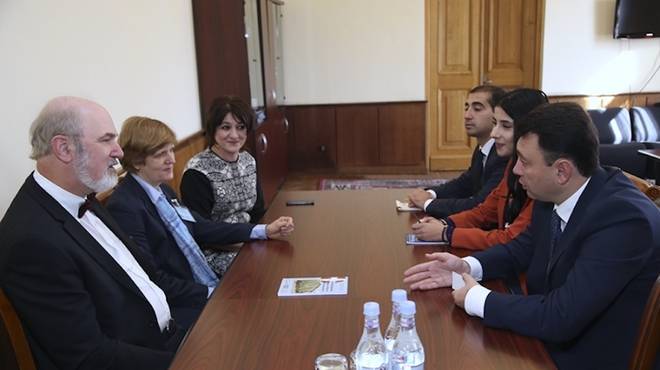 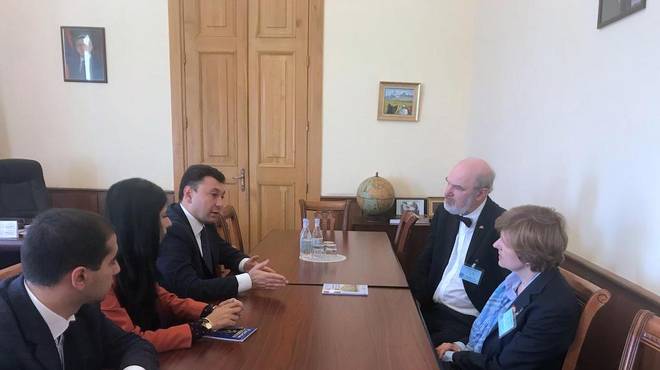 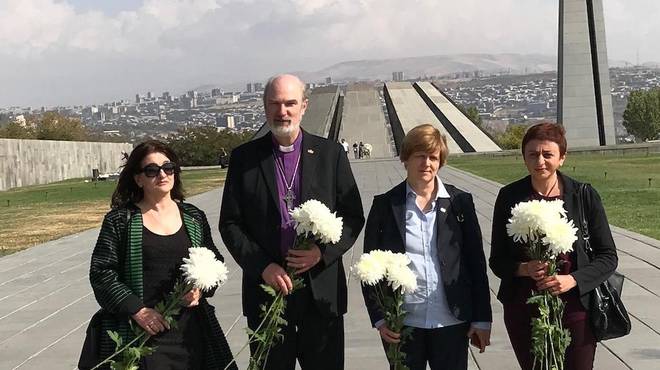 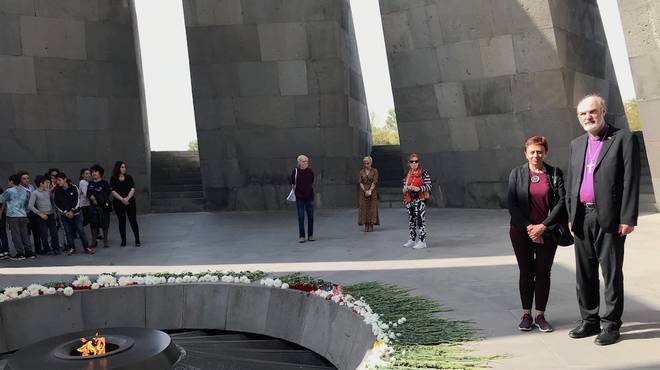 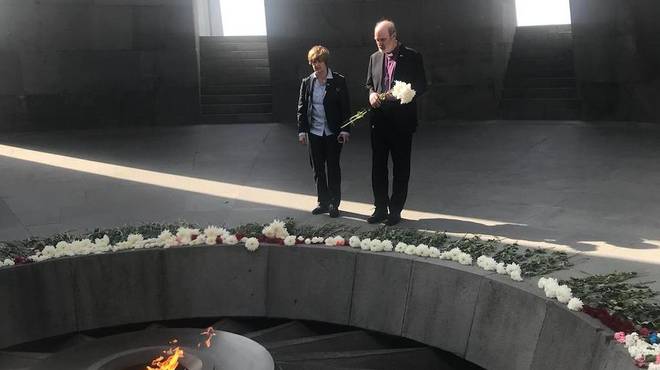 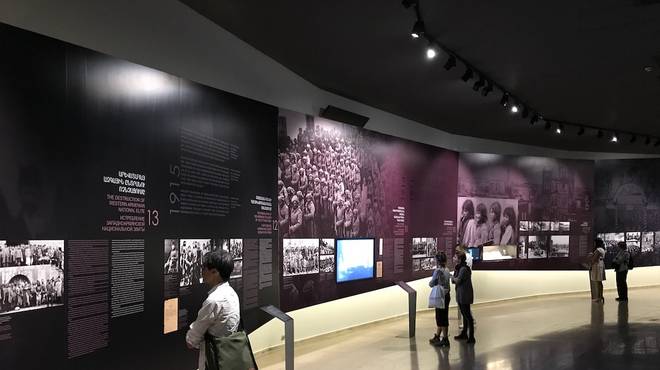 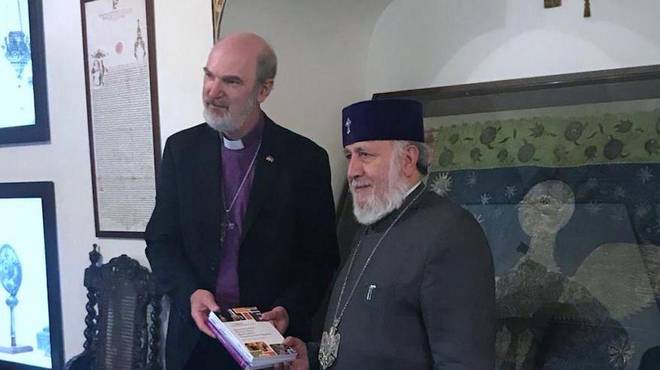 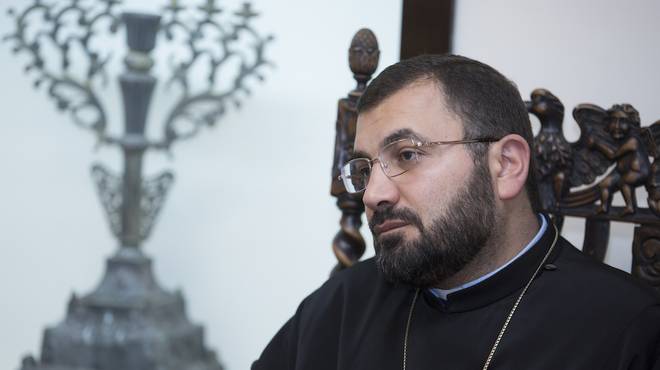 Very Rev. Fr. Shahe Ananyan, Director of the Ecumenical Relations Department of of the Mother See of Holy Etchmiadzin of the Armenian Apostolic Church © BQ/Schirrmacher 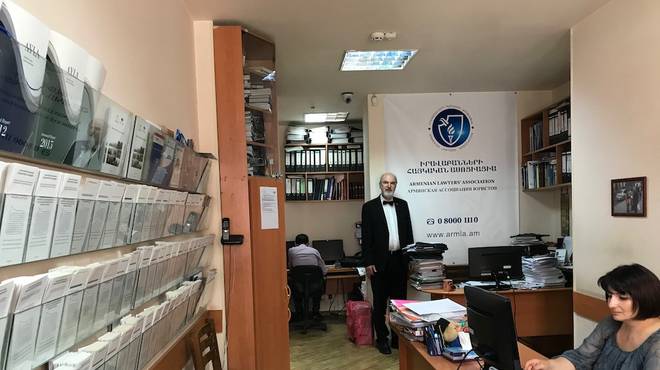 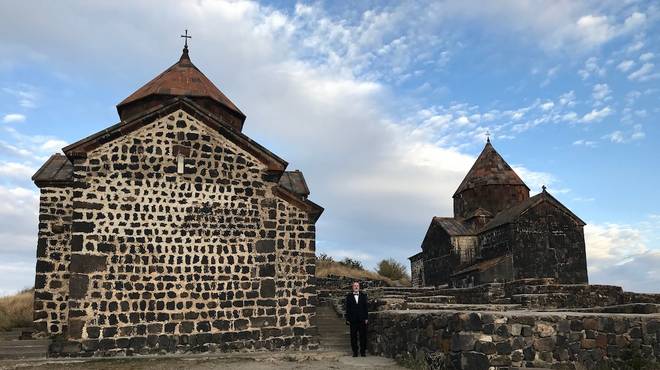 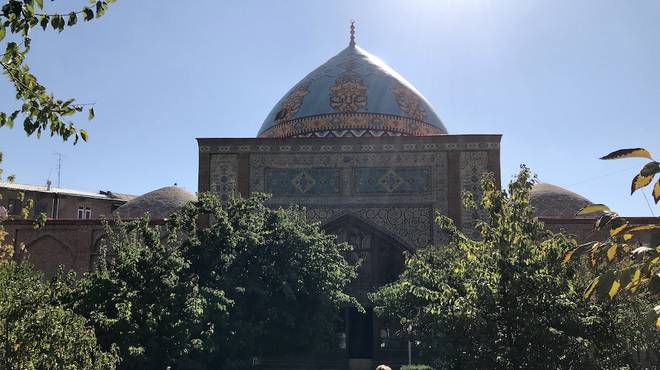 Christine Schirrmacher in front of the only mosque in Yerevan, an old Persian building, which was rebuilt with the help of the friendly neighbouring state Iran © BQ/Schirrmacher 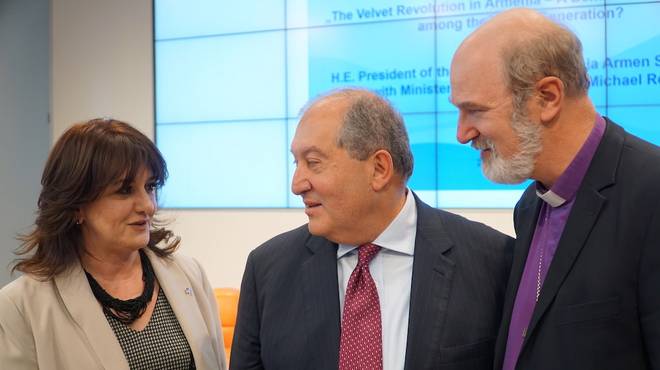 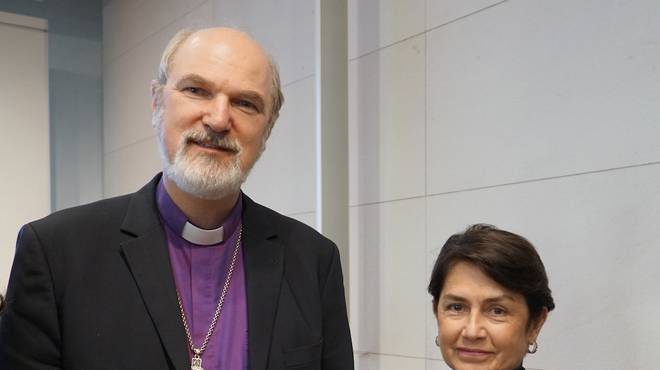 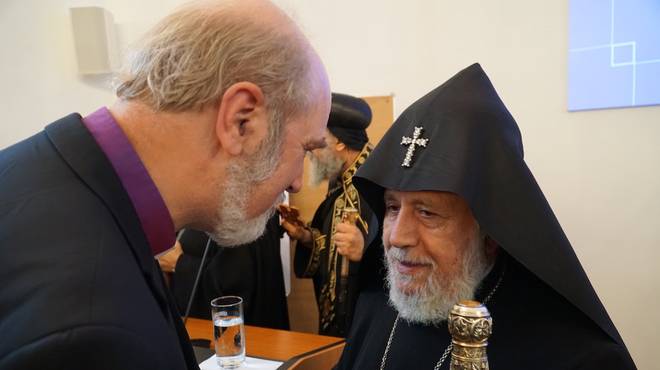 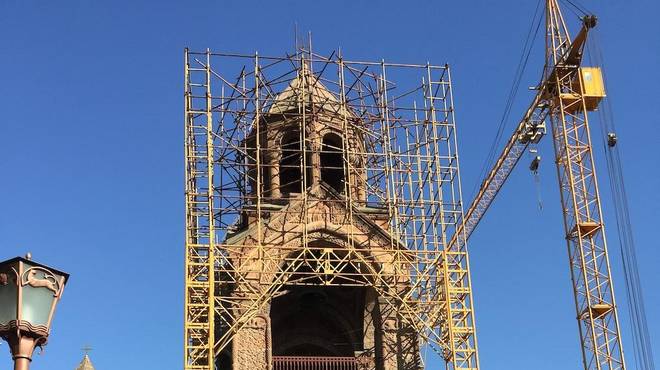 The “Mother Cathedral of Holy Etchmiadzin”, built AD 301–303, 480, and 618, near the seat of the Catholicos in Vagharshapat © BQ/Schirrmacher