Schirrmacher meets the Caliph of Ahmadiyya Muslim Jamaat in London

(Bonn, 27.10.2017) On behalf of the World Evangelical Alliance (WEA), Prof. Thomas Schirrmacher has for the second time met with ‘His Holiness’ Mirza Masroor Ahmad, the fifth Caliph of Ahmadiyya Muslims. The two met this time in the Caliph’s headquarters in London. The discussion revolved around the common struggle for religious freedom. 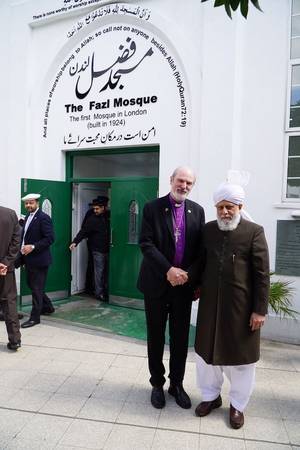 Leading individuals carrying responsibility within Ahmadiyya Muslim Jamaat thanked the World Evangelical Alliance for their efforts to protect Ahmadiyyas around the world and for their having repeatedly criticized Pakistan for killing Ahmadiyyas, for persecuting them, and for constitutionally denying them citizenship.

Schirrmacher had already met the Caliph in 2014 in Karlsruhe and explained the Christian faith and the work of the WEA before 34,000 visitors. Schirrmacher also expressed thanks for rejecting all forms of violence against those who think differently. The Ahmadiyyas are a great model for political Islam’s perpetrators of violence. In Karlsruhe, further cooperation was agreed upon at the UN level and on the level of global platforms. An example of cooperation was the conference put on at the beginning of 2017 by the United Nations High Commission for Human Rights within the so-called Rabat Process in Lebanon.

Schirrmacher, as the Director of the International Institute for Religious Freedom, has repeatedly pointed out that in his view Ahmadiyya Muslims often are victims first and than Christians next, for instance in Pakistan or in Indonesia.

The meeting took place across from the Fazl Mosque in the Wandsworth section of London. The Fazl Mosque was built from 1924 to 1926 (English: ‘mosque of the generous/the virtuous’) is the oldest mosque in Great Britain. Since 1984, the mosque and the surrounding buildings have been the headquarters for the Caliph and other leadership because the Caliph’s life is not safe in his home country of Pakistan.

Schirrmacher conducted additional individual discussions with various representatives of the British arm of the Ahmadiyya Muslim Jamaat, thus with its President Rafiq Ahmed Hayat, the Vice President Mansoor A. Ahab, the Secretary General Mahmud Mubartik as well as the Imam of the London Mosque, Ataul Mujeeb Rashed.

Persecution in Sunni Muslim countries and above all in the home country of Pakistan is primarily traceable back to the fact that according to Mohammad, there are not to be any further prophets. Adherents of special variations of Islam with a prophet after Mohammad are, as a general rule, more strongly discriminated against than Jews and Christians and are not categorized as a religion of the book, but as pagans and idolaters. 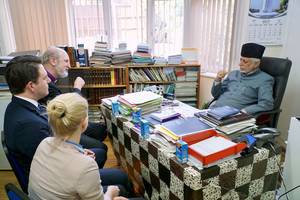 The Ahmadiyya movement originated in 1889 after Mirza Ghulam Ahmad (1835-1908) initially labeled himself as a recipient of revelation. He also later labeled himself an incarnation of Christ, Krishna, and Mahdi, which was equivalent to being a prophet sent by God even though he was not sent with scripture. Under the next but one successor of Mirza Ghulam Ahmad, his son Mirza Bashir ad-Din Ahmad, the movement split into the so-called Qadiani group, who revere Mirza Bashir ad-Din Ahmad as the second Caliph, and the so-called Lahore group, who view the founder Mirza Ghulam Ahmad only as a “renewer” and who reject the office of caliph while instead being led by an emir. Today, the Qadiani group, as Ahmadiyya Muslim Jamaat (Ahmadiyya Muslim Community), is globally the vastly larger and most widespread group.

In contrast to the large majority of Sunni and Shiite theologians, the Ahmadiyya Muslim community campaigns for religious freedom, strictly rejects violence as a means to spreading Islam, and seeks to solicit adherents through intensive but fully voluntary and peaceful missionary work. The most important motto of the Caliph is present everywhere in the form of large banners hanging at major events: “Love for all, hatred for no one.” 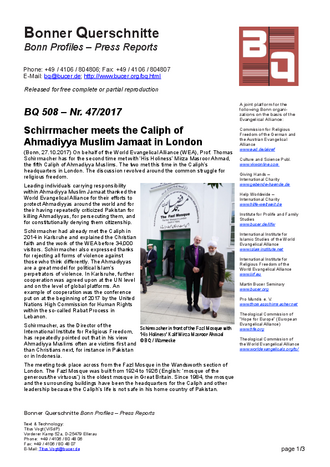