At the CIA it had nothing to do with â??ticking-bomb torture:â? ultimately only sadists use torture.

Multiple German media outlets carried a commentary by Thomas Schirrmacher regarding the torture report of the US Senate. Here we offer his commentary in English, along with his responses to some of the following discussion.

(Bonn, 29 December, 2014) Torture is generally the application of physical or psychological pain in order to break the will of a person, with the goal of getting information from the victim, whether that information is a confession or a retraction. Torture also unleashes our lower human instincts, such as rage, revenge, or retaliation. In the strictest sense, following the United Nations Convention Against Torture, torture has to do with the actions of the organs of a state, including its intelligence agencies. Unfortunately, the anti-torture convention does not yet address non-state actors such as participants in a civil war or terrorists. 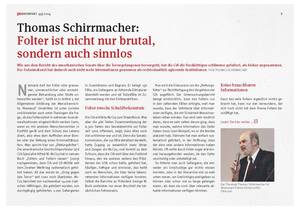 The prohibition of torture belongs to the oldest requirements of the rule of law and is one of the earliest human rights ever formulated.  As such, it was included as an essential component of the French Declaration of the Rights of Man and the Citizen from the time of the Enlightenment, as well as the almost simultaneous American catalogs of human rights of the several states and then the entire United States. The enlightened nobility of continental Europe abolished torture, at least according to law, in 1815, as did the Vatican. The American founding fathers saw the prohibition of torture as a core element pertaining to the essence of democracy.

For this reason it was only natural that the prohibition of torture became a theme in the United Nations Universal Declaration of Human Rights (UDHR) of 1948 (article 5), as well as in the European Declaration of Human Rights of 1950 (article 3), and in several other human rights documents. The International Covenant on Civil and Political Rights of 1966 is especially important for international law. The 1984 United Nations Convention against Torture and Other Cruel, Inhuman or Degrading Treatment or Punishment has been, till now, ratified by 155 states of the world, including the USA.

The Christian churches, from the different Christian confessions, have widely supported the prohibition of torture on theological grounds. Human dignity does not allow torture. Already in the Old Testament there were legal standards for the just treatment of criminals.

âNo one shall be subjected to torture or to cruel, inhuman or degrading treatment or punishment.â (Article 5, UDHR) No one? In the meantime jurists and theologians have begun to debate whether or not the prohibition of torture can be limited by exceptions in extreme situations, for example, if the prohibition of torture is in conflict with other human rights or the protection of human life itself. Standard examples are using torture to find a ticking-bomb or to rescue hostages. In these situations people speak about âemergency tortureâ or âticking-bomb torture.â

In a commentary about the accomplishments of Ernst Albrecht (1930-2014), who was an influential Prime Minister of the German state of Niedersachsen and the father of the present German minister of defence, Torsten Krauel editorialized, âThe theme of worry drove Albrecht so hard that in early 1976, in a report entitled âThe State: Idea and Reality,â typical for the CDU [ed.: the Christian Democratic Union, a conservative German political party] of the situation at that time, he raised the topic of the use of torture. In the case that terrorists had a nuclear bomb, and the location could not be discovered, torture might be legitimate. Of course, (and this addition is usually left out today), those responsible would have to appear in court.â [Die WELT. 14.12.2014]

The most famous case of emergency torture in recent German memory occurred in 2002, and it only had to do with the threat of torture. Under the responsibility of Wolfgang Daschner, the Frankfurt Police Vice President, police threatened to torture the man who had kidnapped Jakob von Metzler, son of a banker, to learn the location of the kidnapped boy. In 2004 Daschner, along with one of his colleagues, had to pay a fine of 10,800 â¬ (about USD 13,500). German law absolutely forbids the use of torture in every case, which includes even the threat of torture without the intent to use torture. However, weighty juridical voices in Germany repeatedly come back to the theme of emergency torture, or at least, similar to the Daschner case, to emergency situations that push us outside the rule of law. We will come back to this theme in a moment.

The American history professor and CIA specialist Alfred W. McCoy, in his book A Question of Torture: CIA Interrogation, from the Cold War to the War on Terror (2006) demonstrated that the CIA and the US military have systematically used torture since World War 2. But this history was far surpassed since 2001 in the âWar on Terror.â McCoy reports on a proven 14,000 Iraqi prisoners who were tortured, along with an average of 1,100 prisoners held in Guantanamo and Bagram. He documented 150 cases in which prisoners were delivered to dictatorships that practice torture and 68 deaths in connection with the practice of torture.

The CIA declared McCoy to be an enemy of the state. But the roughly 500 page summary of the 6,700 page US Senate report on torture since 2001 shows that the real situation was and is still worse than reported by McCoy. The Senate Committee, which detailed 119 cases, had access to far more documents and witnesses than McCoy, and came to the conclusion that the CIA went far beyond the authorization given by the US president. This means that the CIA more frequently and more intensively used torture than the president allowed, and that the CIA did this to people who could not have access to life-saving information, so that this torture could not be described as emergency or ticking-bomb torture. And even the reports to President George W. Bush described only a tiny part of the practice of torture.

Now the discussion of emergency or life-saving torture has been brought in to justify the actions of the CIA.  Temporarily leaving aside the question of whether emergency torture could ever be justified in extreme situations, even then the actions reported in the US Senate report could not be justified.

The report of the Senate investigation demonstrated decisively that only very rarely did torture succeed because the torturers knew that the person being tortured had access to information that could assuredly save human lives. This was the case because it was very seldom that the torturers knew what information their victim had access to (for example, where he had placed a bomb). Far more frequently, torture was used systematically in the hope that a victim would happen to have some useful piece of information. In many cases it was only discovered through torture that the victim was not guilty, not involved, and unimportant, or if the person was influential and holding some possibly useful information. In 26 of the 119 cases in the report, the victims were discovered to be completely innocent by the CIA, even by their own arbitrary standards of innocence.

This means that people were tortured who were either innocent parties who could not know anything, or else stood too far down in the hierarchy to know anything important, or else had been held in prison for so long that they no long knew current information.

That so much torture had so little result, so that very little of the massive amounts of intelligence delivered to the president was learned through torture, is astonishing only to people who have never really considered the process of torture. The problem with information gathered by torture is that one never knows if the victim simply says something in order to stop the torture. By the nature of torture, one is simply unable to know if the victim has important information. Additionally, after resisting torture for a long period of time, victims often knowingly provide false information. A person who has gone 180 hours without sleep, a favorite CIA method, will not provide reliable information, being, rather, on the very edge of insanity. In short: the report of the Senate investigation shows that the CIA, in spite of the routine use of torture, did not really know much more than the institutions that used means appropriate to the rule of law.

Please do not misunderstand me. I am not speaking in favor of emergency or ticking-bomb torture, even though I am using this form of argumentation. Rather, I want to make clear to those people who defend a very limited use of emergency torture, that the Senate report does not portray such a restricted use of torture; the Senate report is describing the so-called âRight of the Victor:â to treat the losers as sub-human because someone might possibly know something.

That those using the emergency torture argument knew this was only pretense is shown by the fact that torture is not usually used by police, the military, or by judicial authorities, but only by secret services that receive their authorization in secret, and that then keep the larger part of their work secret from their own boss, in this case the US president, effectively turning the president into a stooge.

Additionally the Senate report confirms one more concern: the authorization to use torture leads to escalation. Such permission to use emergency torture leads, all too often, to routine torture or even to joy in inflicting pain as shown in the horrendous photos of the offenders and their colleagues with the victims of torture. Though emergency torture was once regarded as an absolute exception, a true last resort beyond the borders of moral and legal rationality, it became the everyday routine.

This also relates to the torturers. The report confirms that many of the people inflicting torture wanted to stop, that many reported up the chain of command that it had to stop, and that many vomited during torture sessions. At the end, only the sadists continued. And for such people, of course, any boundaries or rules of play mean nothing. And that this was the situation that was consciously tolerated is shown by the fact that even in the cases of the worst excesses, no one has been punished or even brought to trial.

Similar developments are to be found worldwide whenever the prohibition of torture is loosened even a little. That is why one must carefully observe the starting point. When one hears President Obamaâs lame explanation, that something like this must not happen again, even though the promise to end such things had long ago contributed to his election, one is not filled with great hopes that this report will do much more than arouse short-term indignation. 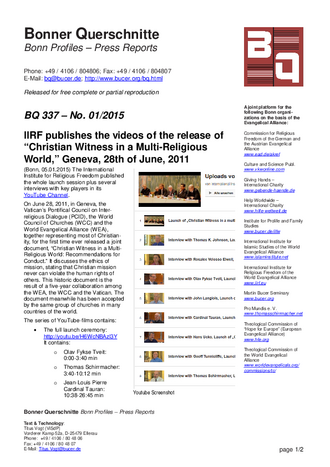