Evaluation of the consultation by Prof Dr Janet Epp Buckingham published as IIRF Reports no. 7

Coming from all continents, they represented several religions and beliefs, and several Christian confessions, even though Protestant researchers were overrepresented, mirroring the situation worldwide. The researchers represented a wide range of disciplines, such as law, sociology, human geography, comparative religions, and theology.

Beside research on specific countries like Brazil, Argentinia, South Africa, Sudan, Cyprus, and Turkey, the consultation gathered regional case studies of religious violence and how to counteract it. Rainer Rothfuß, professor of human geography in Tübingen, Germany, promoted studies for “governance for peace” for divided countries like India, Sudan, Cyprus or Timor Leste. Abhijt Nayak from India followed a similar line for his country in Hindu-Christian conflicts.

But there were also discussions how more peaceful situations could be improved. Law professor Rodrigo Vitorino Souza Alves from Brazil described the need to implement religious freedom more robustly in Latin American countries. Law professor Janet Epp Buckingham from Canada lectured on “The treatment of minority religions by a dominant religion”, and professor of constitutional law Shaun de Freitas from South Africa on “Cautioning against irreligious proselytism in education”.

South African Law professors Lovell Fernandez and Werner Nicholaas Nel presented each their line of the legal arguments why and when persecution of Christians should be qualified as genocide and crimes against humanity. Italian law professor from Naples, Antonio Fucillo, discussed in depth the relationship of “Law, economy, and religion” and applied the results to religious freedom questions.

The chief of the sociology of religion department of Istanbul University presented a paper on “Projections of religious Freedom in Islam and Muslim Traditions”.

See also the next two Bonner Profiles on the consultation. 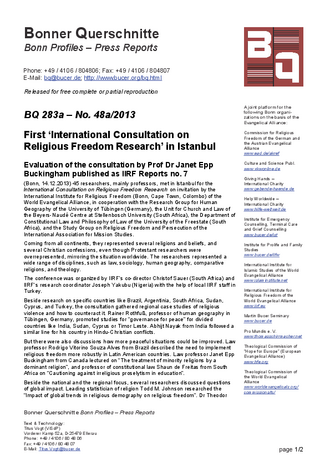