(Bonn, 14.12.2013) Forty-five researchers, many of them professors from several universities, met in Istanbul (Turkey) for The International Consultation on Religious Freedom Researchat the invitation of the International Institute for Religious Freedom (Bonn, Cape Town, Colombo) of the World Evangelical Alliance, in cooperation with The Research Group for Human Geography of the University of Tübingen (Germany), the Unit for Church and Law, Beyers-Naude Center, of Stellenbosch University (South Africa), the Department of Law and Philosophy of Law, of the Faculty of Law, of the University of the Free State (South Africa), and the Study Group on Religious Freedom and Persecution of the International Association for Mission Studies. 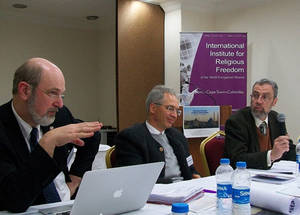 Coming from all continents, the researchers represented several religions and beliefs and several different Christian confessions, even though Protestants were overrepresented, mirroring the situation on religious freedom research worldwide. The researchers represented a wide range of academic disciplines, including law, sociology, human geography, comparative religions, and theology. The conference was organized by IIRF’s co-director Dr. Christof Sauer (South Africa) and IIRF’s research coordinator Joseph Yakubu (Nigeria), with the help of IIRF staff living in Turkey.

In addition to religious freedom research related to specific countries, including Brazil, Argentina, South Africa, Sudan, Cyprus, and Turkey, the consultation gathered regional case studies of religious violence and how to counteract it. Rainer Rothfuß, professor of human geography in Tübingen, Germany, promoted studies for “governance for peace” for divided countries such as India, Sudan, Cyprus or Timor Leste. Abhijt Nayak, from India, followed a similar line for his country regarding Hindu-Christian conflicts.

There were also studies related to how more peaceful situations can be improved. Law professor Rodrigo Vitorino Souza Alves from Brazil described the need to implement religious freedom more robustly in Latin America. Law professor Janet Epp Buckingham from Canada lectured on “The Treatment of Minority Religions by a Dominant Religion.” And law professor Shaun de Freitas from South Africa gave a speech, “Cautioning Against Irreligious Proselytism in Education.”

Participants of the consultation

Beside the national and the regional focus, several researchers discussed questions of global impact. Leading statistician of religion Todd M. Johnson described the “Impact of Global Trends in Religious Demography on Religious Freedom.” Dr. Theodor Ratgeber, involved in ecumenical research for the Protestant Church in Germany and the (Catholic) German Bishops Conference, pleaded for using a human rights approach in all of religious freedom research methodology.

South African law professors Lovell Fernandez and Werner Nicholaas Nel each presented their lines of the legal arguments why and when persecution of Christians should be classified as genocide and crimes against humanity. Italian law professor from Naples Antonio Fucillo discussed in depth the relationship of “Law, Economy, and Religion” and applied the results to religious freedom questions. The chief of the sociology of religion department of Istanbul University presented a paper on “Projections of Religious Freedom in Islam and Muslim Traditions.”

Some of the speakers identified cultural sources of continuing threats to religious freedom. Three such cultural threats or sources of religious persecution described in the consultation include radical secularism (in which state institutions promote secularism as a rival religion), sexual radicalism (which portrays traditional religious sexual ethics as discriminatory), and dominant majority religions (which often deny freedom of religion to minority religions). These three cultural sources of threats to religious freedom were identified in many countries. Among threats to religious freedom coming from dominant religions, several varieties were mentioned, including Hinduism in India, Buddhism in Sri Lanka, Islam in some Arab countries, and even, mostly in the past, some varieties of Christianity in the West. It was emphasized that there are almost always significant religious minorities whose rights need special protection; for example, sociologist Thomas Schirrmacher pointed out that there are today roughly 300 million Christians in Muslim majority countries.

There was also recognition given to the number of countries whose governments are taking strides to respect freedom of religion in their foreign policy efforts. Since 1998, when the US government adopted the International Religious Freedom Act, making religious freedom a core principle of US foreign policy, other countries have begun to take similar steps. Also in 1998, the Norwegian Ministry of Foreign Affairs began significant efforts to protect freedom of religion through the Oslo Coalition on Freedom of Religion or Belief. In more recent years, the UK, Italy, Germany, and Canada have begun to address freedom of religion as a matter of government policy, and similar efforts are expected soon from Romania.

The participants were painfully aware of the extent and terrible results of religious persecution locally and globally. They left the consultation more committed than ever both to use their individual and institutional research programs to protect persecuted believers and to develop the level of international consultation needed. The combination of research, reporting, and analysis have to one part of a multi-faceted world response to religious persecution and discrimination.

Photo 1: the editors of the International Journal for Religious Freedom Schirrmacher, Sauer, Baskerville during the consultation

Photo 2: participants of the consultation

Photo 3: during a presentation, first row from left: Sauer, Yakubu, Häde, Yogarajah (Chairman of the IIRF)

Photo 6: with the Syriac Orthodox Metropolitan in Istanbul 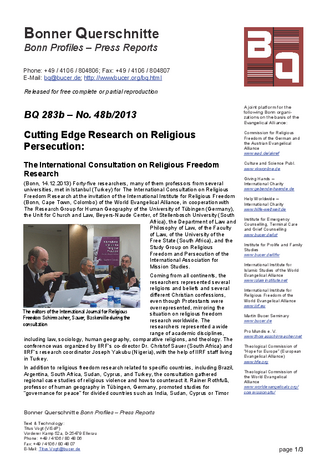