A Commentary by Thomas K. Johnson

(Bonn, 14.12.2013) For a few years it has been clear that religious persecution is as high as or higher than it has ever been in history. With the International Consultation on Religious Freedom Research it is now becoming clear that the quality of analysis of and response to religious persecution is also reaching new heights. Held in Istanbul, Turkey, March 15-18 under the auspices of the International Institute for Religious Freedom of the World Evangelical Alliance in cooperation with three universities, almost forty scholars from around the globe (including South Africa, Nigeria, Brazil, Turkey, Italy, Canada, Sri Lanka, France, Germany, New Zeeland, the US, the UK, and central Asia) pooled cutting edge research. The researchers brought new information, new methods of measuring and confirming patterns of religious persecution that were previously perceived, and new philosophical/historical paradigms that should bear fruit. Because religious persecution effects almost every area of human life, religious freedom research has become extremely interdisciplinary, with scholars representing the fields of Christian studies, Muslim studies, law, political science, sociology, philosophy, and journalism participating in this consultation. Many of the papers presented at the consultation should be published in the International Journal for Religious Freedom (the peer reviewed and academically accredited journal of the IIRF) and in other journals and books.

This academic research can be appreciated in light of the “seven pillars” of the quest for religious freedom which Thomas Schirrmacher, WEA Ambassador for Human Rights, has identified. Though only one of these pillars is research, all of these pillars need serious research and publications to become more effective. Prayer ranks as the first pillar, and since the earliest days prayer for the persecuted has been a part of Christian worship; today this is expressed in the International Day of Prayer for the Persecuted Church. The second pillar is explicit solidarity with those affected by offering assistance and training. The third pillar is media work, since honest, accurate reporting is essential to document the problems. Fourth, there is the legal defense of those affected before courts, as well as other forms of advocacy. At this time Advocacy International has its own network of thousands of lawyers, though more legal advocacy is urgently needed. Much religious persecution is contrary to the laws of the country in which it occurs and should be addressed in the courts. The fifth pillar is political activity. Since Christians are against violent self-defense and advocate the separation of church and state through the state monopoly on the use of force, they should not use violence to protect themselves. Rather, they have to call upon states to defend their human rights. Where one’s own state does not intervene, Christians turn towards other states and global organizations with their plea to apply pressure to other states. Prayer, humanitarian aid, legal defense, media activities, and political involvement are all only possible where there is sound information. For this reason the sixth pillar is the WEA’s investment in global research, represented at the Istanbul Consultation. Seventh, and finally, the WEA has a ‘Peace Building Track’ in order to actualize a space for local, political peace between adherents of different religions, for whom nothing is more important than to get to know each other.

I hope that this process of academic research and reporting will begin to become effective in terms of reducing persecution and promoting the many social benefits that follow from religious freedom, but the problem to be faced remains very severe. 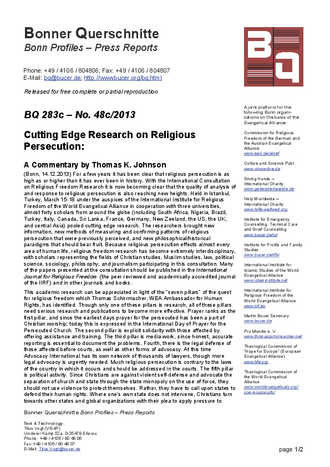