Racism can be reflected in the leadership structure of churches

(Bonn, 22.12.2020) During the 2020 meeting of the The Convocation of Episcopal Churches in Europe (CECE), The Reverend Stephen McPeek, Frankfurt, Chair of the Task Force “Racism, Reconciliation, and Beloved Community”, presented a report and survey on racism in Europe. On this occasion, the CECE interviewed three experts on racism during its annual convocation, which took place online due to covid-19, the Anglican priest Yejide Peters, the Muslim expert Dr Michaël Privot, Director of the European Network Against Racism, and the author of a book against “Racism”, Bishop Prof. Dr Thomas Schirrmacher, President of the International Council of the International Society for Human Rights. 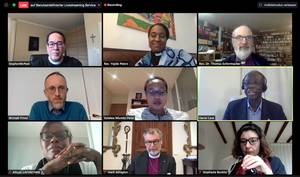 Schirrmacher claimed racism to be more than just a societal evil which one could suppress with the law and the power of the state. “It is sin”, he said, it is “a dark and deep motivation coming from deep in our heart, with which we often have become so acquainted, that we do not even realise it”, he said.

In light of the first appointment of an Afro-American cardinal from the USA, Bishop Thomas Schirrmacher criticised, that very often the top leadership of churches and global Christian communions would not reflect the racial components of its churches. In India dozens of Dalit-congregations officially wrote to Pope Francis, that they will leave the Catholic Church, if he would not appoint a considerable number of Dalits as bishops. Dalit Christian form a forth to a third of all Catholics and Christians in India. “Racism”, Schirrmacher said, “is not just an every day discrimination, but is deeply built into power structures and financial structures. The church of Jesus Christ should prove, that such feelings and prejudices have been overcome through reconciliation in Jesus Christ.”

The Convocation of Episcopal Churches in Europe is a diocese founded in 1859 that includes 9 congregations of the Episcopal Church of the USA in Continental Europe, more precisely at present in Belgium, Germany, France, Georgia, Italy, Austria and Switzerland. In Germany, congregations can be found mainly at former positions of the US forces, in Munich, Nuremberg, Frankfurt and Wiesbaden. It is laid by Bishop Mark David Wheeler Edington since 2018. The Rt. Rev. Adington was previously Bishop the Diocese of Massachusetts of chaplain at Harvard University and director of the Anglican publishing house Amherst College Press (with Lever Press).

From the programme – the three experts on the panel on racism

The Rev. Yejide Peters is an Episcopal priest who has stepped out from metropolitan New York and the banks of the Hudson river to land in Shropshire, rural England, and is now the Vicar of St .Chad’s, with St Mary’s and St Alkmund’s. She has had both personal and professional experience of racism, and among other things is the co-founder of Repair: Rivertowns Episcopal Parishes Action on Inclusion and Race.

Dr Michaël Privot is the Director of the European Network Against Racism, a pan-European anti-racism network that combines advocacy for racial equality, and facilitating cooperation among anti-racism actors in Europe. Michaël has expertise in the field of Diversity and Inclusion Management, is a Muslim and is the founder of the European Institute of Islamic Studies, collaborating in the development of a European Master’s degree programme to train ulamas for Europe.

Prof. Dr. Thomas Schirrmacher is President of the International Council of the International Society for Human Rights, the Associate Secretary General for Theological Concerns of the World Evangelical Alliance and presiding Bishop of the ‘Communio Messianica’. He testifies on human rights to many bodies including the EU Parliament, the US House of Representatives and the United Nations, and is a prolific author. His engagement on our theme today includes a volume entitled Racism, which is part of a series providing insights from an evangelical Christian perspective, into some of the greatest challenges we face in the world. 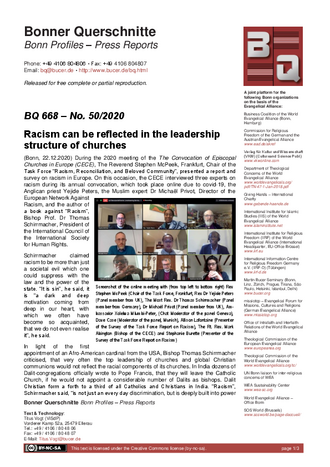