The seven official reports to the UN Human Rights Council of the UN Special Rapporteur on Freedom of Religions and Belief, each report having ist own specific topic like religious minorities, apostasy and blasphemy, conversion, women's rights, school education etc.

Since assuming his position as United Nations Special Rapporteur on freedom of religion or belief, Heiner Bielefeldt devotes each of his reports to a major topic, all of which are reprinted in this volume in full. He addresses important topics which are often bypassed due to their complexity or emotionality, addressing themes such as conversion or religious minorities. He also discusses supposed conflicts between different human rights, such as FORB and non-discrimination. He is convinced that human rights should never be understood as opposed to each other since ultimately the many rights go hand in hand. The topics he addresses are relevant for the whole range of institutions of society in their relation to FORB, including the state, schools, employers, and organized religion. 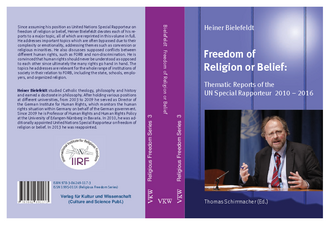